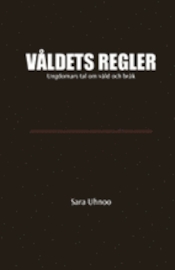 The importance of a problem, a social aspect or a subject can be reflected in the number of existing dissertations and other fact books found in the area. In English, I have managed to find fifteen fact books that deal with sibling abuse and also a couple of autobiographies. In Swedish I have not found a single one. However, I discovered by accident, a dissertation entitled “The Rules of Violence – Young People talking about Violence and Disputes” written by Sara Uhnoo and published at the University of Gothenburg in 2011. In it, there is actually a chapter dealing with sibling abuse and sibling rivalry. Below is a summary of that chapter.

Sara finds that abuse between siblings is very rarely reported to the police and the fact that the concerned crime, is a crime where both parties are mostly children or adolescents can explain the matter. Sibling rivalry is very widespread, and the actuality that it is so common stops the media or the parliament from taking an interest in it. There is therefore a great social tolerance for sibling rivalry and for that reason it is seen as unproblematic. For the same reason, Sweden also lacks an interest organization for victims of sibling abuse.

A well-known Swedish child and family psychologist believes that it is impossible to live in close relationships without falling out sometimes. Thus, sibling rivalry can only be regarded as natural and normal and a way for children to practice their conflict management skills. In a pamphlet from a county council addressed to parents 2008, there is a section about sibling rivalry that states that it is the responsibility of the parents to watch their children and to manage the situation so it does not go too far and become dangerous. The brochure also states that sibling rivalry mostly occur as a problem among younger children who have not yet developed their empathy skills.

Among the adolescents that Sara interviewed for her dissertation, several of them believe that sibling rivalry is just a legitimate way for older brothers to discipline their younger siblings, but that it should be done in a controlled, competent and moderate manner. Furthermore, many of the teenagers just see sibling rivalry as a manifestation of sibling love and therefore there is no intention of harming their siblings, despite a few bruises. They also describe the reciprocity of the sibling disputes by talking in “we”-form. If the siblings are comparable, they also think that it is legitimate to use force, since the opposite side uses as much force as they themselves do. They also think that it may be okay to use violence against younger and weaker siblings, if the purpose is for disciplinary purposes. The youth also think that sibling rivalry is okay, but not sibling abuse. Sibling rivalry doesn’t turn into sibling abuse until you hit really hard, with the intention of hurting.

It’s an interesting chapter that Sara Uhnoo has written. Unfortunately, she only confirms what I already suspect – that society is minimizing sibling rivalry. The fact that the same violations that happen between siblings and which just makes people shrug, most often would result in a police report if it occurred between two adult strangers, says a lot. Why doesn’t society think that victims, whose siblings are their perpetrators, have the right to feel protected?

I think the well-known child and family psychologist speaks rubbish when she says that sibling rivalry is perfectly normal and that it’s just a way for children to practice conflict management skills. However, I do not think that it is possible to live in a close relationship with another person without being at loggerheads at times, either. In addition, I also believe that sibling rivalry can occur without either party feeling or getting seriously hurt. (Sibling rivalry is a widely used term that can mean anything from a slight disagreement to gross abuse.) But every time a child, a teenager or an adult is subjected to violence or abuse from a sibling is an extremely tragic and terrible event and something that needs to be taken seriously. Just because sibling rivalry is common, does not mean that it cannot be harmful.

I suppose that it is older siblings that have been interviewed since they think it’s okay to discipline their younger siblings, because the thesis doesn’t mention anything about how their younger siblings feel about being disciplined. Some of them might feel traumatized? We also learn that the interviewed youth think that sibling rivalry is an expression of sibling love. This sounds a little strange to me. Do they not instead mean that the fact that you can fall out with a sibling and then patch up afterwards is a sign of how strong the ties can be between siblings? The fact that you do want to patch up with somebody that you at the moment have fallen out with, is a sign that there is affection and love.